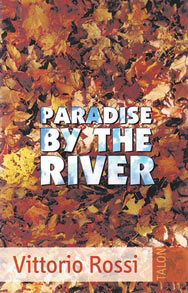 Paradise by the River, a drama in three acts by Vittorio Rossi, is to open the 2010/11 season at the Centaur Theatre.

The catalyst for the play is this country’s Defence of Canada Regulations during WWII, a law which permitted the incarceration of Italian-Canadians. But Rossi goes further than mere polemic and presents a fascinating portrait of the Italian community in crisis, including a vast array of stool-pigeons, hustlers, frauds and carpetbaggers who existed inside and outside the Italian neighbourhoods of this country. The author also shows a profound humanity as he describes the experiences of a particular group of people caught up in chaos and red-tape. The work is old-fashioned in the best sense of the phrase and it is no surprise that Rossi dedicated the work to his father, “the master storyteller.”

A stone mason is sent off to an internment camp while his family tries to survive without him. His wife is forced to deal with all the difficulties of life alone while he adjusts to survival behind barbed wire. Both, however, have squealers near them who are making their lives more miserable.

When asked about the challenge of putting history on stage, Rossi replied, “It has to be about the story. So what I tried to do is to make very clear to the audience what the political backdrop was of the story. Make it clear that the world was at war. Make it clear that the Italians were deemed to be dangerous, that the government had to do something to protect its citizens. And then, having done all that, tell a story.”

Vittorio Rossi is also the author of The Carpenter, Carmela’s Table, and Hellfire Pass.