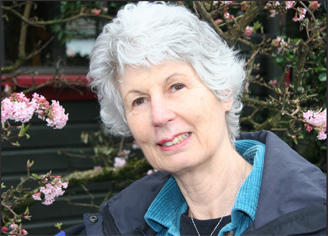 On June 28, the 2012 George Woodcock Lifetime Achievement Award will be presented to Daphne Marlatt at the Vancouver Public Library in an event that starts at 6:30 pm.

Born as Daphne Buckle, Marlatt spent six years in Malaysia after World War II before she immigrated to North Vancouver in 1951. Much of her postmodernist writing would be attuned to the adjustments, struggles and accomplishments of immigrants. While Marlatt attended UBC (1960-1964), her literary associations with the loosely-affiliated TISH group encouraged her non-conformist approach to language and etymological explorations.

She was the founding editor of two literary magazines: periodics and Tessera. She co-edited West Coast Review, Island, The Capilano Review, and TISH. In 2004 she was appointed as the first writer-in-residence at Simon Fraser University in three decades. She currently co-directs the annual Banff Writing Studio.

In 2006, Daphne Marlatt was appointed to the Order of Canada. She now lives with her partner, Bridget MacKenzie, in Vancouver. Collaboration has been a significant element of her career, beginning with her 1970s oral history research in the Japanese-Canadian community of Steveston and then in the multi-ethnic neighbourhood of Strathcona. Opening Doors in Vancouver’s East End: Strathcona was the first book to be republished under Vancouver’s 125 Legacy Books Collection program in 2011.

Daphne Marlatt’s recent ventures into theatre have extended this element. In 2008, The Gull, her contemporary Canadian Noh play, was awarded the international Uchimura Naoya Prize. In 2009, she won the Dorothy Livesay Prize for The Given. In 2011, Marlatt completed the libretto for a chamber opera, Shadow Catch.

We are also pleased to announce that Daphne Marlatt’s Liquidities: Vancouver Poems Then and Now will be appearing from Talonbooks in 2013.