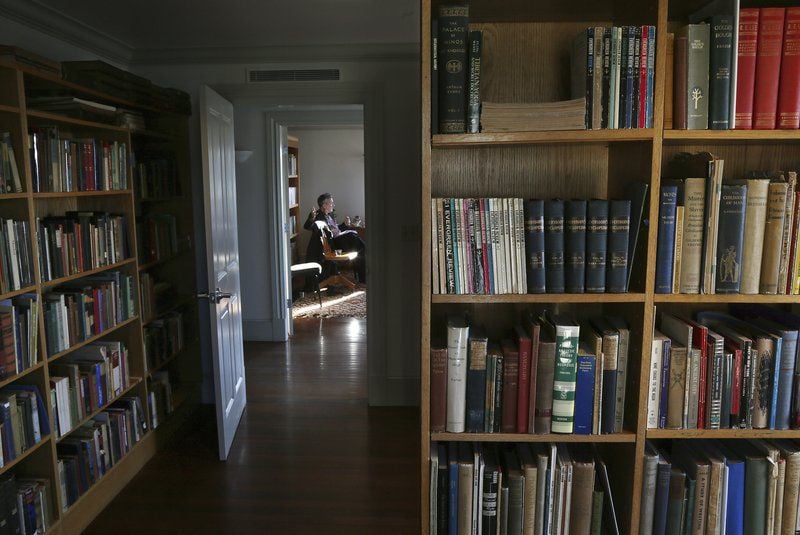 Above: the Charles Olson library, now in Gloucester (Photo by Mike Springer)

Ralph Maud, a world-renowned expert on the work of Dylan Thomas, Charles Olson, and the ethnographers of the Paciﬁc Northwest, was professor emeritus at Simon Fraser University in Burnaby, British Columbia, and founder of the Charles Olson Literary Society. His impressive collection of books was recently bequeathed to the Gloucester Writers Centre in Gloucester, MA, in the United States, and the library is now open. To quote a recent article in the Gloucester Times,

The late Ralph Maud, an Olson scholar, recreated this radical poet’s library and added more than 1,000 books Olson reviewed, read, or referred to in his writing. A bibliophile of mammoth proportions, Olson taught at diverse institutions, from Harvard University to the experimental Black Mountain College in North Carolina.

On his deathbed, Maud, a professor at Simon Fraser University, bequeathed his facsimile of Olson’s library to the Gloucester Writers Center.

Olson (1910-1970) continues to be a source of literary exploration by scholars around the globe, and Maud’s collection is more expansive than any other Olson collection, with its extensive notes and supplementary material, and because he enhanced it by including other sources related to Olson. This past weekend, the Writers Center celebrated the opening of the Maud/Olson Library, located at 108 East Main Street, with an open house.