Portrayals of Mental Illness in Literature, From Tennyson to Today

For much of the Victorian era (1837–1901), science and pseudo-science were thickly entangled. But this increasingly educated society was eager to separate fiction from fact. The field of mental health was becoming open to exploration, in part because investigations into King George III’s madness in 1798 had made it fashionable to be a physician with an interest in mental health, or so Ann C. Colley writes in Tennyson and Madness (University of Georgia Press, 1983, 11).

The probing of mental health issues wasn’t confined to physicians, however. The task was taken up with fervour by poets and writers as well. Victorian literature reflects an increasing willingness to explore the mental state – a willingness that culminated, in the early twentieth century, with the birth of psychology as a field of study and science.

But let’s not get ahead of ourselves. Let’s begin, instead, by revisiting Alfred Lord Tennyson’s poem “Maud,” written in 1855. It may be read online at Bartelby.com. 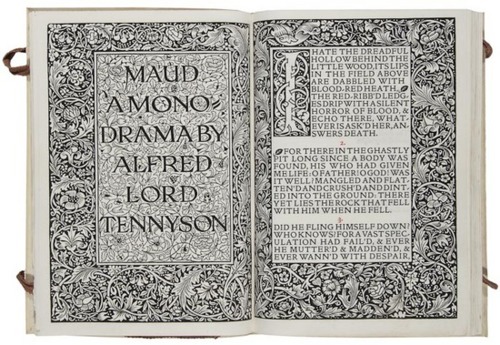 Arguably, the purpose of “Maud” is to inquire into the nature of a “morbid, poetic soul, under the blighting influence of a recklessly speculative age.” This is how Tennyson himself described the poem – see The Broadview Anthology of Victorian Poetry and Poetic Theory (Broadview Press, 1999, 254). Colley also recalls the existence of a particular prejudice: “that ‘those in whom the imaginative faculty is inordinately developed,’ poets in particular, ‘are particularly liable to morbid affections of the mind’ ” (23). (So was Tennyson, the poet, writing self-consciously?) Tennyson’s insight into madness and his society’s understanding of madness influence one another profoundly within “Maud,” but they are also distinct. Colley has described the relationship thus:

[Tennyson] and his poetry fight against Romantic enclosure by adopting the pose of the observer who constantly attempts and occasionally succeeds in shedding light on the chamber’s vision of misery and pain. The impetus, though, for this struggle did not come from Tennyson alone. It also belonged to the mood of his age, which feared the excesses of the Romantics and, therefore, anxiously explored the darkness, using analytical and clinical tools. The Victorians did not want to become victims of that darkness and believed that one way to overcome such a fate was to attempt to understand, to shed light on the misery and pain. (Colley 8)

In the early nineteenth century, popular understandings of madness permitted two categories, according to Colley: mania, or delirium in which a patient showed “violence, tempestuous passion, and fury”; and melancholia, or what would today be called depressive disorders (13). The word “melancholy” was eventually replaced by “monomania,” for “melancholy” was thought to be more poetic than precise(ly medical) (13). “Madness” itself was “a word that stood for a diverse and complex range of unstable behaviour and morality, ranging from sinful thoughts to hypochondria, to obsessive thinking and mania” (8).

(I can’t help but think of Lily McEvoy, the perfectly bitter and revengeful protagonist of Martine Desjardins’s A Covenant of Salt [Talonbooks, 2007]. Would she, in her late-eighteenth-century setting, have been labelled both manic and melancholy? She was chronically and quietly both furious and depressive. Or, because she was wealthy and genteel, would she have been seen simply as an eccentric spinster?)

The Diction of Sickness

Mental illnesses are various, and none is quite like the other. Yet how easy it is to paint all afflictions and conditions with the same brush. One such brush – and it is still in use today – is the word “sick.”

When Connor first got sick I told my mother it was as though an enormous flock of birds had descended on our house. Black birds.

Because they’d arrived so quickly, so suddenly – maybe they would leave just as fast?

(Quoth the raven: what a neo-gothic image!)

Depression clearly counts as a sickness for Connor’s mother. “Sick” primarily means “affected by illness,” but to be sick is also to be “deeply affected by disappointment, fear, sorrow, grief, etc.” (See the Canadian Oxford Dictionary, 2nd edition [OUP, 2004].) The protagonist of “Maud” laments that he is “Sick, sick to the heart of life, am I” (Part One, X, ii); evidently he is also “disgusted by too much exposure” and possibly “angry, especially because of surfeit.” What’s more, says he,

So multiple denotations of “sick” are layered upon one another in both “Maud” and The Valley.

The term “psychiatry” was coined in 1846 “to denote medical treatment of disabling mental conditions, which were generally held to have hereditary causes,” writes Jan Marsh in The Victorian Vision (V&A Publications, 2001 – see Marsh’s essay, 96–115). Hereditary inclinations toward certain conditions (alcoholism and addiction in general, for example, as well as schizophrenia and depressive disorders) have now been established, but in the nineteenth century the lack of criteria used to diagnose any number of “madnesses” and neuroses made ascribing hereditary causes difficult.

But how to explain madness if/when it is not hereditary? Tennyson sets out, in “Maud,” to assign just causes for his protagonist’s mental condition, and concludes that the protagonist has submitted to pressures caused by the “madness of love” (“Maud,” Part One, IV, x) – a concept still transmitted today by pop culture – and “the loss of her whom he has loved.”

Tennyson’s brand of madness is temporary. In the final stanzas of “Maud,” the protagonist repeats that “it was but a dream” and claims “I wake to the higher aims” (Part Three, VI, i), “to the better mind.” Colley sums up Tennyson’s perspective: “it is sometimes necessary to be mad in order to be cured of moral obliquity, and … at times, it is also necessary to … suffer from the disorder to discover the order” (27). The Yellow Wallpaper (1892) by Charlotte Perkins Gilman portrayed mental illness as temporary as well. In this late Victorian (or early Modern) gothic story, the protagonist’s paranoid delusions combine with the menace of her husband to communicate the unsettling impression that what is real may not be real, and what is unreal, existing only in the mind, may have the ultimate influence on behaviour – if one is not mentally strong enough to overcome. If equipped, though, with “great passion” (Tennyson’s words) or “supremacy of will” (Colley’s words), the madman can wholly recover his reason.

Many authors have offered reasons or causes for their characters’ madnesses, but real mental illness defies causal relationships and simple solutions. MacLeod acknowledges this painful truth in The Valley, as does Allie Brosh in her pieces “Adventures in Depression” and “Depression, Part Two,” (originally published on her blog and now found in her book Hyperbole and a Half [Touchstone, 2013]). Brosh appears to be making light of her experiences with depression but is in fact shedding light on it for others, dismissing every clichéd expression of comfort or solidarity she was offered for having missed the mark. Still, in the act of trying and sometimes failing to explain mental illness, all the works of literature I have yet mentioned have contributed to the current collective understanding that mental illness is complex and cannot be dismissed as anything else. 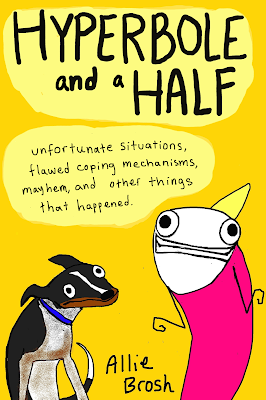 The twentieth century brought treatment techniques that seemed more advanced than asylums: lobotomies in the 1930s, electroshock therapy in the 1950s, and finally, in the 1990s, a culture saturated with pop psychology and dependent on therapy. Modernists were convinced they would find absolute problems and answers in neuroscience and psychology. Postmodernist thought accepted – perhaps too readily – that there were no such absolutes. That “modern” psychiatric wards were still essentially asylums, and that aggression and fear were still a normal experience for patients in such places, were the theses of Ken Kesey’s 1962 novel One Flew Over the Cuckoo’s Nest. Later texts, like Susanna Kaysen’s 1993 memoir Girl, Interrupted, would explore the psychiatric ward from a female perspective. Today, we continue to learn about the nature of mental illness.

In the “new millennium,” readers of literature are more comfortable with moral and mental ambiguity. Consider the success of Herman Koch’s novel The Dinner (published in English by Random House in 2013), in which the narration begins as reliable (tongue-in-cheek, familiar), becomes more unreliable (clearly biased and aggressive), and is ultimately revealed to be the voice of a high-functioning sociopath with, possibly, Asperger Syndrome. Other unsettled and unsettling characters, teetering on the balance between mentally unstable and “normal,” narrate fictions by Larry Tremblay (notably in Piercing and The Obese Christ, which will be published in English in April 2014.)

MacLeod wants more for her mentally ill characters than that their stories are heard and their basic needs fulfilled. It is choice that matters, that humanizes: in Toronto, Mississippi (Talonbooks, 2008) readers are endeared and relate to the developmentally challenged protagonist, Jhana, because she wants to make her own choices in life about her work and the nature of her relationships with those in her life. She wants to participate in moral decision-making rather than be swept along by the choices of others who are, by society’s parameters, more mentally capable. This we read as admirable and progressive.

The Valley has more to do with depressive disorders than developmental conditions. In the below exchange, Connor’s depression resembles Brosh’s (as described in Hyperbole and a Half); it is expressed as helplessly self-centred and exhausting. Connor’s relationship with his mother appears to be vitriolic (a word used frequently by Tennyson in “Maud”), but it seems to have come with the territory of his depression and isn’t inherent in his character.

CONNOR: Here’s what I accomplished today. I thought about making a sandwich – with your stupid hippie mayonnaise and how I’ll slice the tomatoes thick. But thinking about the sandwich – it’s exhausting. So I go back to bed even though I just slept fourteen hours. I wake up two hours later – starving. I eat some Cheerios out of the box. And I watch TV. Now I’m watching you. You and the TV – you’re interchangeable.

CONNOR: Stop being a fucking cheerleader.

In fact MacLeod’s thesis in The Valley – for both families in the play gradually learn this – seems to be that the support of loved ones is integral to recovery, even if there does not appear to be a direct correlation, and even though the real recovery seems to begin within. MacLeod presents a multifaceted truth, tying mental illness to social justice, and provoking her audience to think about the difficult but important questions faced by today’s diverse, urban societies: what is just for everyone involved? How can an individual, a community, and institutions promote the well-being of everyone?

Mental illness has come out of its confinement; it is no longer relegated to the minds of afflicted individuals, but has become a collective concern. The Valley presents all these impressive but realistic complexities, demanding that its audience attempt to understand the physiological and social conditions that may contribute to mental illness, and simultaneously reflecting upon familial and social impacts. MacLeod’s new play offers insights into mental illness today as Tennyson’s “Maud” influenced his society’s understanding of madness – and how far we may or may not have come in our understanding of sickness and mental health.