Canadian distribution for Talonbooks is now through the University of Toronto Press Distribution. Returns also go through the University of Toronto. Our Spring books will begin to roll out soon! Check out our Spring 2020 Catalogue now. Sign up for our monthly newsletter here, peruse our list of upcoming events here, and don't forget to follow us on Twitter, Facebook, and Instagram.

Our Fall 2019 Catalogue is now available!

Kim Senklip Harvey’s play, Kamloopa: An Indigenous Matriarch Story, is a high-energy Indigenous matriarchal story that follows two urban Indigenous sisters and a lawless Trickster who face the world head-on as they come to terms with what it means to honour who they are and where they come from.

As she worked on the print version of the play, Kim reflected on working with Indigenous Matriarch Nancy Saddleman to translate the n̓səl̓xcin̓ parts of her play: “I deliberately wrote moments to be unearthed, moments where you have to switch your paradigm into a Syilx one.”

Read more about her process on her blog.

Laiwan: WANDER: Toward a Lightness of Being, in Vancouver

WANDER: Toward a Lightness of Being (2019) is a public art project created in collaboration with UBC’s Department of Earth, Ocean and Atmospheric Sciences (EOAS) and commissioned by TransLink, Metro Vancouver’s transportation network, and the City of New Westminster. The art project is located at the 22nd Street Skytrain Station Bus Exchange, 649 22nd St, New Westminster, B.C.

WANDER encourages playful discovery of and advocacy for the lives of phytoplankton, making visible the water critters inhabiting the Fraser River, collected for this project from nearby the 22nd Street Bus Exchange site. The artwork aims to encourage curiosity among commuters and the general public about the natural and built environment surrounding this site.

The project simulates a ‘hidden object activity’ where commuters and audiences have opportunity to locate the twenty-two icons and a number of haikus on site. Some designs may not be immediately obvious, but all can be found in a variety of forms, surfaces or possibilities

Our Spiritual Lives: A Christmas-y tale from M.A.C. Farrant

We’re happy to be sharing another Christmas-y tale from M.A.C. Farrant this almost-Christmas! Talon’s offices will be closed from the afternoon of December 24th, reopening the morning of January 2nd. Happy holidays, everyone!

We’ve seen stains on tea towels that look like Jesus Christ’s face so we know he exists. And we know that dried seaweed can save the Douglas fir from extinction so we hang dried seaweed from the tree’s branches.

But some people don’t pray at all, believing the practice to be old-fashioned. My friend Warren is like that. He says he’d rather trust the presence of hamburgers in his life to render it benign. He told me this at a party.

Most people, though, believe that the greatest prayer we will ever say for ourselves and our children is that none of us falls from the sky or falls into a grave too soon.

Children, of course, pray to shells brought back from the beach for unexpected joy to visit. A woman I know named Andrea Sumner does this, too. She arranges shells along with rocks, feathers, and pieces of dried kelp in a circle on her living-room rug and claims good results.

Then there are people believing there are giants everywhere. And there are. You and I are just not one of them.

And in case you’re wondering about all those composite pictures tacked onto telephone poles in recent weeks? It’s Jesus Christ again. The pictures are meant to show what he’d look like if he were alive today and sixty-nine years old and lost. Like practically everyone we know.

“Wanderers. All of them. All the Desrosiers, never satisfied, always searching elsewhere for something better …”

Renowned Québec author Michel Tremblay’s Desrosiers Diaspora series spans the North American continent in the early years of the twentieth century. In nine linked books, this 1,400-­page family saga provides the backstory for some of Tremblay’s best-­loved characters, particularly Rhéauna, known as Nana, who later becomes the eponymous character in Tremblay’s award-­winning first novel, The Fat Woman Next Door Is Pregnant, and who is based on Tremblay’s own mother. The Desrosiers Diaspora follows Nana and the other remarkable Desrosiers women, including Nana’s grandmother, Joséphine, and her mother and aunts, Maria, Teena, and Tittite, as they leave and return to the tiny village of Sainte-Maria-de-Saskatchewan, dispersing to Rhode Island, Montréal, Ottawa, and Duhamel in the Laurentians. In Tremblay’s vivid, headlong prose, with its meticulously observed moments both large and small, the Desrosiers’ tumultuous and entwined lives are revealed as occasionally happy, often cruel and impulsive.

The first four volumes of the Desrosiers Diaspora series have been translated into English by Sheila Fischman and Linda Gaboriau and published by Talonbooks. English translations of novels five through nine are forthcoming. In French, they were published by Leméac Éditeur.

In the first volume, Crossing the Continent, we find Nana living with her two younger sisters, Béa and Alice, on her maternal grandparents’ farm in Sainte-Maria-de-Saskatchewan, a francophone Catholic enclave of two hundred souls. At the age of ten, amid swaying fields of wheat under the idyllic prairie sky, Nana is suddenly called by her mother, Maria, whom she hasn’t seen in five years and who now lives in Montréal, to come “home” and help take care of her new baby brother. So it is that Nana embarks alone on an epic train journey through Regina, Winnipeg, and Ottawa, on which she encounters a dizzying array of strangers and distant relatives, including Ti-­Lou, the “She-Wolf of Ottawa.”

The story continues in Crossing the City, where we meet Maria as she leaves the city of Providence, Rhode Island, pregnant and alone; we also meet Nana in Montréal, two years later. Having crossed the continent from her grandparents’ farm in Saskatchewan, Nana now traverses the city, alone, in an attempt to buy train tickets to reunite her family. Crossing the City includes vivid descriptions of Montréal’s early-­twentieth-­century neighbourhoods, which Nana traverses as she makes her journey.

The third novel in the series, A Crossing of Hearts, opens during a stifling heat wave in Montréal in August 1915, as war rages in Europe. The three Desrosiers sisters – Tititte, Teena, and Maria – have been planning a vacation in the mountains, to do nothing but gossip, laugh, drink, and overeat while basking in the sun. Maria’s children beg to come along. Reluctantly, Maria takes her children on the week-­long trip to the Laurentians. As the reader views the journey through young Nana’s eyes, we come to understand the impoverished circumstances they leave behind in Montréal, only to find poverty evermore present in the country. Yet it feels good to get out of town, and encounters with rural relatives crystallize young Nana’s true feelings for her mother, as confidences and family secrets fuse day into night.

Rite of Passage, just published, finds Nana at the crossroads of the end of childhood, facing the passing of her adolescence and the arrival of new responsibilities as her grandmother Joséphine approaches her last hours. To calm the storm, Nana reads the enthralling tales of Josaphat-the-Violin – a returning character in Tremblay’s Plateau Mont-Royal Chronicles. Three of Josaphat’s fantastical stories contain revelations whose full influence in her own existence Nana cannot yet measure. In parallel, Nina’s rebellious mother, Maria, languishes back in Montréal. She is torn between her desire to gather her young family around her and her deep uncertainty about being able to care for them properly.

Next in the series will be The Grand Melee, translated by Sheila Fischman, to be published in Fall 2020.

For even more information about this series and Tremblay’s other linked works, check out this piece about the development of the character of Nana!

Rite of Passage journeys to Talon 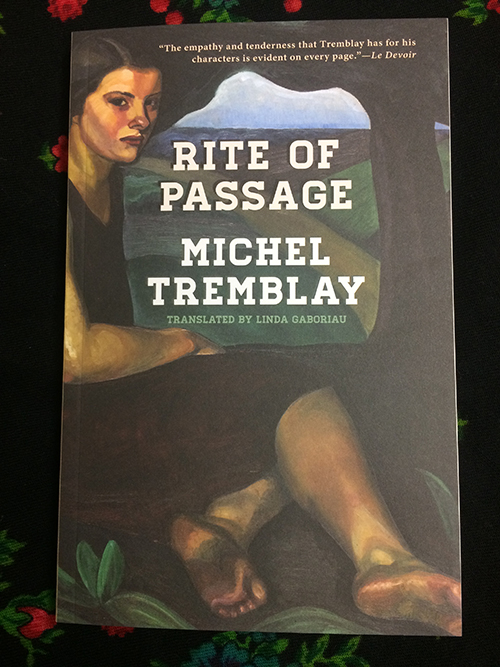 At the crossroads at the end of childhood, Nana faces the hectic passing of her adolescence and the arrival of new responsibilities as her grandmother Joséphine approaches her last hours. To calm the storm, Nana reads the enthralling tales of Josaphat-le-Violon – a returning character in Tremblay’s Plateau-Mont-Royal Chronicles. Three of Josaphat’s fantastical stories contain revelations whose full influence in her own existence Nana cannot yet measure. In parallel, Nina’s rebellious mother Maria languishes back in Montréal. She is torn between her desire to gather her young family around her and her deep uncertainty about being able to care for them properly. Always in search of what’s “best” and what’s “elsewhere,” will Maria seize the opportunity “which only hits the door of life once”?

Pick up your copy of Rite of Passage today!

If you haven’t yet, pick up your copy of I Saw Three Ships today!

Kamloopa: An Indigenous Matriarch Story, by Kim Senklip Harvey with The Fire Company, has arrived in-house at Talon!

Come along for the ride to Kamloopa, the largest Powwow on the West Coast. This high-energy Indigenous matriarchal story follows two urban Indigenous sisters and a lawless Trickster who face our world head-on as they come to terms with what it means to honour who they are and where they come from. But how to go about discovering yourself when Christopher Columbus allegedly already did that? Bear witness to the courage of these women as they turn to their Ancestors for help in reclaiming their power in this ultimate transformation story.

In 2018, Kamloopa had a three-city world premiere and was nominated for eight Jessie Richardson awards and four SATAwards. The production won the 2019 Jessie Richardson award for Significant Artistic Achievement for Decolonizing Theatre Practices and Spaces and was the first Indigenous play in the awards history to win Best Production. Kamloopa was the 2019 recipient of the Sydney J Risk prize for most outstanding emerging playwright and won the SATAward for outstanding Projection Design.

We are so pleased to welcome Kamloopa: An Indigenous Matriarch Story! Pick up your copy of the book today!

I Saw Three Ships #1 in Paperback Fiction at McNally Robinson

Bill Richardson’s wonderful book, I Saw Three Ships, is #1 in paperback fiction on the November 10 to 20 bestseller list for McNally Robinson Winnipeg.

If this news excites you as much as it does us – and if you’re in Vancouver – we have just the thing for you. You can be part of the audience for a live recording as Bill joins CBC Radio host Sheryl MacKay for a conversation about I Saw Three Ships on December 7 at 11 a.m. at the Central Library branch’s Montalbano Family Theatre, Level 8.

Congratulations to Stephen Collis, the 2019 recipient of the Latner Writers’ Trust Poetry Prize

We at Talon would like to extend a huge congratulations to Stephen Collis, the 2019 recipient of the Latner Writers’ Trust Poetry Prize. This prize is given to a mid-career poet in recognition of a remarkable body of work, and in anticipation of future contributions to Canadian poetry.

The Jury Citation, from Hoa Nguyen and Margo Wheaton, reads, “In Collis, we find a poet ferociously hitting his stride. We’re looking forward with eagerness to what comes next.”

Talonbooks is pleased to have three Governor General’s Literary Award Nominations this year – two in drama and one in translation.

From now until October 28 October 31, these three nominated books will be 30 percent off when you purchase them through our website.

So, if you haven’t yet, now is a great time to pick up your copy of Tetsuro Shigematsu’s 1 Hour Photo, Kevin Loring’s Thanks for Giving, and Simon Brousseau’s (translated by Pablo Strauss) Synapses!

my yt mama
By Mercedes Eng

Orwell in Cuba
By Frédérick Lavoie
Translated by Donald Winkler

Pots and Other Living Beings
By annie ross

Rite of Passage
By Michel Tremblay
Translated by Linda Gaboriau

Searching for Sam
By Sophie Bienvenu
Translated by Rhonda Mullins